Usain Bolt is widley regarded as the fastest man in the world (at the time of this writing...you never know). He sparked this belief at the 2008 Beijing Olympics as he set the world record in both the 100m and 200m...and along with his team mates set the world record in the 4x100m relay. He then returned to the 2012 London Olympics and again dominated the 100m, 200m, and again with the help of his team the 4x100m relay. This had never before been accomplished. Such a fantastic victory and titles for a man of only 26 (born in 1986). 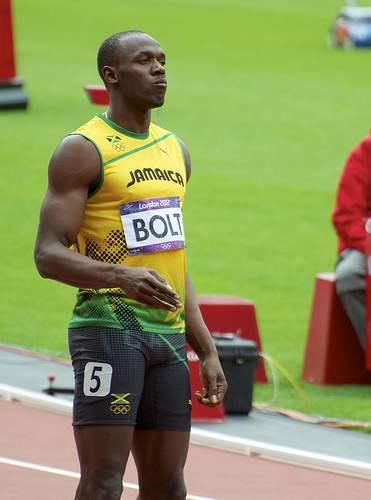 Usain "Lightning" Bolt has become an entertaining celebrity. Not only famous for his speed but also for his fun "antics" both on and off the track. All this has helped him be one of the most marketable and greatest athletes ever (obviously I am a bit partial) and thus the highest paid sprinter and athlete in track and field. Usain has marketing deals with large names such as Digicel,Virgin Media, Puma, Gatorade, Hublot, VISA, and Nissan. Oh...he also has an app - quite addicting. 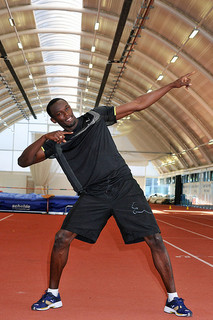 Though Usain is known for sprinting, it was not always his sport of choice. For some time when he was younger he enjoyed - and probably still does - soccer and cricket. Cricket was actually his favorite sport. He has said that if not for track and field he would have been a bowler in cricket. He was actually encouraged to get serious about running when spured on by his crisket coach. He has been reported as saying that he has always been a fan of sports in general. So, it is then no surprise that he is looking forward to another Olympic Games in 2016 to be held in Rio, Brazil and may consider other events.

Because Jamaica is such a small island they take their country men and women who have accomplished greatness very seriously. Usain Bolt and the rest of the Jamaican team at the last two Olympic games (and others before them) have made the island proud.

Return from Usain Bolt to the Sports in Jamaica page.