Red Jack Restaurant: A Must for Seafood

The Red Jack Restaurant and the Quartemaine are both located at the Morgan's Harbor Hotel and Marina in Port Royal, Jamaica - near Kingston. Both restaurants have their distinctive feel as well as dinning and menu. While the Quartemaine is a good place for a nice ambience and inside dinning the Red Jack offers a casual place to enjoy fine seafood.

The restaurant has built a fine name for itself and has been featured in many magazines and the local newspaper on numerous occasions because of its great food and Jamaican cuisine. 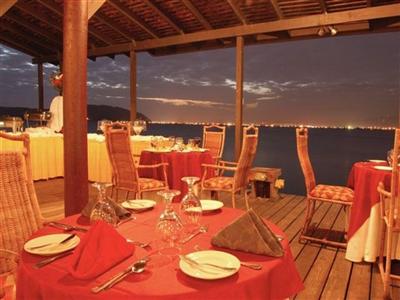 My wife and I enjoyed each other's company on our first date at the Red Jack (though at that time it simply went by the name of its hotel and marina.) The restaurant was given its current name in 2004 when reopened by Neville Blythe. We have great memories of that night. The food was fantastic and the environment was both welcoming and special. The view of the Kingston Bay was delightful.

The pricing at both the Red Jack and Quartemaine are mid range. As would be expected the most popular meals on the menu are seafood meals. Though there are some Jamaican specialties as well. The management of the restaurant take pride in fusing both Jamaican and Italian cuisines.


Return from Red Jack Restaurant to the Jamaican Food page